The April 2018 attack went undetected for nearly a year, according to an audit report issued on June 18, and an investigation is still underway to find the culprit.

A Raspberry Pi is a credit-card sized device sold for about £34 ($35) that plugs into home televisions.

It is mainly used to teach coding to children and promote computing in developing countries.

The breach came about as a result of a system administrator failing to update the database that determines which devices have access to the network. As a result, new devices could be added without proper vetting.

In response to the attack, the JPL 'installed additional monitoring agents on its firewalls' and was reviewing network access agreements with its external partners, the report said.

'Officials were concerned the cyberattackers could move laterally from the gateway into their mission systems, potentially gaining access and initiating malicious signals to human space flight missions that use those systems.' 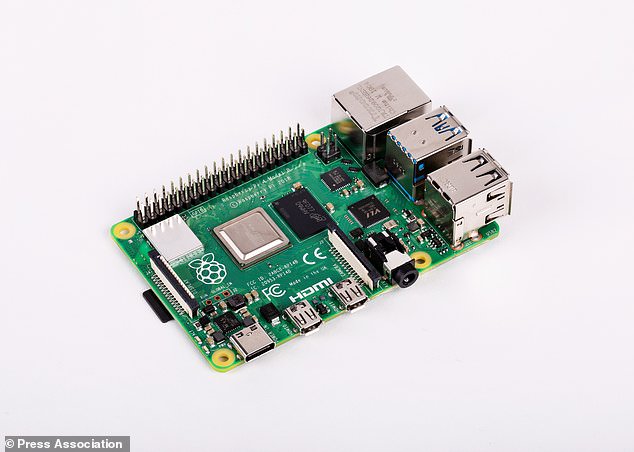 The news comes as Raspberry Pi today released the latest version of the DIY motherboard.

Its makers claiming it is the world's most affordable multimedia desktop PC.

The Raspberry Pi 4 is capable of driving two independent screens running 4K resolution content and has three times the processing power of its predecessor.

The credit card-sized computer is designed to be highly customisable with an appeal to computer hobbyists.

It can also be bought in a bundle with a mouse, keyboard, SD card, power supply, cables and case for the first time to help recreate the experience of a desktop computer.

The new computer also includes Gigabit Ethernet and USB 3.0 connectivity ports on its single board to allow other devices to be connected to it.

Created by the Raspberry Pi Foundation, the device is the fourth-generation model of the charity's computer.

They are designed to be low-cost, high-performance devices which enable more people around the world to gain access to a computer for the first time.

Co-founder Eben Upton said the updates to the new computer meant it should now be considered as a competitor to traditional desktops in the PC market.

'The vision behind Raspberry Pi 4 is to make a rich multimedia PC experience accessible to everyone,' he said.

'By offering a "just right" level of performance for most users, we've been able to do this at roughly a tenth the cost of a traditional desktop PC.

'This is a significant development for the PC market as a whole. Raspberry Pi is already the best-selling British computer of all time.

In 2018 Q4 Raspberry Pi 3+ and earlier models accounted for 2.5 per cent of the global PC market.

The Raspberry Pi 4 also comes with a range of programming languages, letting users enter the world of developing and coding, as well as using the device like a traditional PC.

It is already used widely in education and industry.

WHAT IS A RASPBERRY PI AND WHAT CAN IT DO?

The Raspberry Pi is a low cost, credit-card sized computer that plugs into a computer monitor or TV and uses a standard keyboard and mouse.

It’s capable of doing everything you’d expect a desktop computer to do, from browsing the internet and playing high-definition video, to making spreadsheets, word-processing and playing games.

It's mainly used to teach coding to children using programming languages like Scratch and Python and to promote computing in developing countries.

The Raspberry Pi also has the ability to interact with the outside world and has been used in a wide array of digital DIY projects, posted on its creators site and all over social media.

Some of these projects include making music playing machines and parent detectors, to weather stations and birdhouses equipped with infra-red cameras.

Computer - Internet and I...

My computer does not turn...

Does the BioScan software...

What is the solution to t...

People remain calm as the...